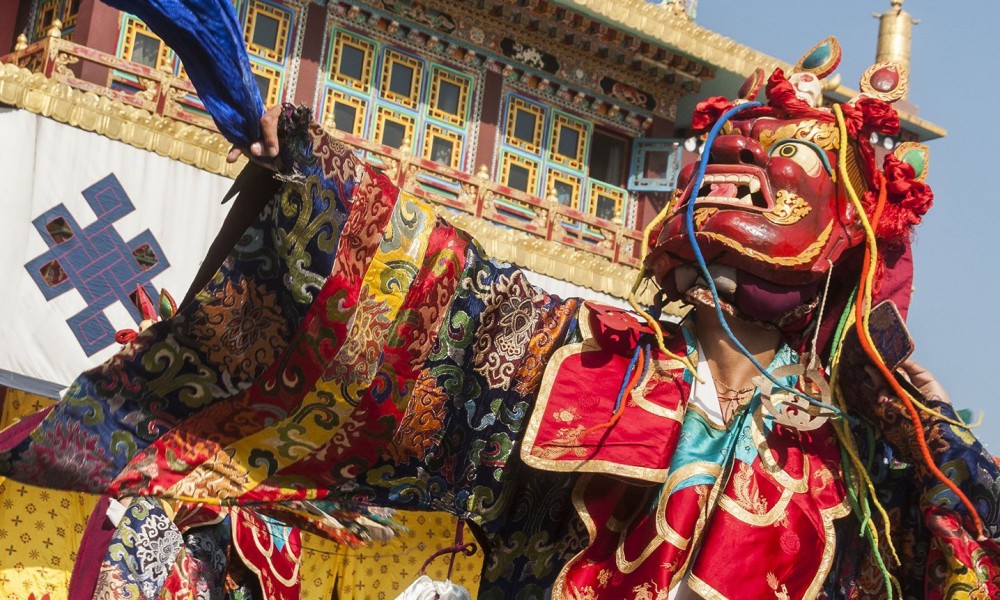 LOSAR – Losar is one of the festivals in Nepal. The festival is celebrated in Buddhist religion follower community like Sherpa, Tamang, Gurung and Thakali etc. who live in the hilly and the mountainous region. The literal meaning of losar is New Year and follows the cycle of 12 years called Lohokor. (Lo)is the special name given to each year and represented by different animals with its reputed attributes like mouse, ox, tiger, cat, garuda, serpent, horse, sheep, monkey, bird, dog and deer,. The cycle of animals is arranged in a single circle printed on a paper or a cloth. In Nepal when there was no calendar, the 12 rotation system was used to calculate peoples’ ages. On the very day of the festival the people visit the monasteries and stupas to pray, worship and have blessing from the monks for happiness and wellbeing. The stupas, monasteries, houses rooftop and mountain top are decorated with new colorful prayer flags and colorful decorative items to bring peace and harmony to the nation to the world. The ethnic people clad in their traditional costumes perform their cultural singing and dancing welcoming the New Year with feasts and family gathering. On the occasion of Loshar the Government of Nepal announces public holidays. there are many types of Losar in Nepal like GYALPO LOSAR SONAM LOSAR TAMU LOSAR etc GYALPO LOSAR:- Gyalpo Losar is celebrated by the Sherpa community living in the Himalayan region in Nepal. They have distinct dialect and culture. They are world famous mountain climbers and the first one to scale Mount Everest in Nepal, the highest mountain in the world. It is the celebration of Tibetan New Year falls that in the month of February in English Calender. It is made up of twelve lunar months and losar begins on the first day of the first month. The day of Loshar begins on the 29th day of the 12th month calendar. It is celebrated typically for almost two weeks. Preparation of festive begins by making special Sherpa snack Khapse,a deep- fried pasty which is commonly eaten during the festive. In ancient times, people went to the local spring to perform rituals of gratitude. Offerings were made to the Nagas, or water spirits, who activated the water element in the area, and smoke offerings were made to the local spirits associated with the natural world. These rituals took place for an entire month leading up to New Year day.The houses are cleaned, specially the kitchen has to be cleaned properly because it is place where the family prepares the food. Chimneys are also cleaned from inside. Some special dishes are cooked for the new year ceremony. One of the dishes is a soup served with dumplings called Guthuk. The soup is made from meat, rice, sweet potatoes, wheat, Yak cheese, peas, green peppers, vermicelli and radishes. Sometimes, different hidden items are used in fillings for the dumplings. The items are chilies, wood, paper and pebbles. People comment on the nature (character) of the person on the findings inside his/her dumplings. If one finds wood means he has wooden heart, etc. This is done for enjoyment. During the festival, people recall the struggle between the good and the evil in their ceremonial dance and Lama chants mantras and passes the fire torches through the crowds. People perform the traditional dance battle encounter between the king and the deer and amuse the spectators.The date of the three Losars varies but the outcome is same. It is a festival of reunion of the families, relatives and friends to unite together for partying, merry making, exchanging gifts and greetings. So, the people could revitalise to start fresh with zeal for more progress and harmony in terms of spiritual, mental and physical.